From Slave Ship to Harvard : Yarrow Mamout and the History of an African American Family 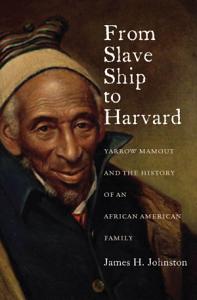 Yarrow Mamout was a Fulani Muslim who came to Maryland on a slave ship in 1752. Jim’s book follows later generations of the family through Robert Turner Ford, who graduated from Harvard in 1923.

Jim Johnston is a lawyer who turned to writing.  He has more than 100 newspaper and magazine articles to his credit and has won two journalism awards.  He has written four books, including From Slave Ship to Harvard: Yarrow Mamout and the History of an African American Family. Since its publication in 2012, the book has become recognized as a significant contribution to Black History.

Yarrow Mamout’s is one of the most remarkable success stories in American history. Brought to Maryland on a slave ship in 1752, he lived for a time in Montgomery County.  After he was freed, he became the most prominent African American in Georgetown. In 1819, the great portrait painter Charles Willson Peale learned of Yarrow and painted a “remarkable likeness” as a testament to racial equality. Historian Jim Johnston from Montgomery History will present the story of this remarkable man and his descendants.

Join us for this special presentation in honor and celebration of Black History Month.